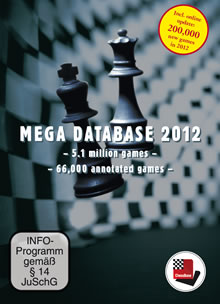 The exclusive annotated database. Contains more than 5.1 millions games from 1560 to 2011 in the highest ChessBase quality standard. 66,000 games contain commentary from top players, with ChessBase opening classification with more than 100,000 key positions, direct access to players, tournaments, middlegame themes, endgames. The largest topclass annotated database in the world. The most recent games of the database are from the middle of November 2011. Mega 2012 also features a new edition of the playerbase. As usual, this is where most of the work was done. As the player index now contains already more than 265,000 entries, it made sense to use an adapted playerbase which includes about 282,000 names. Doing this, the photo database was extended as well to contain 33,000 pictures now. Incl. Online Mega-Update 2012: With ChessBase 10 or 11 you can download games for Mega 2012 for the whole year, a total of approximately 200,000! That means your Mega 2012 will remain up to date from January to December.