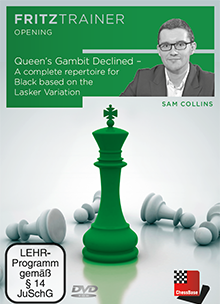 How to play the Queen's Gambit
Training with Garry Kasparov
€29.99