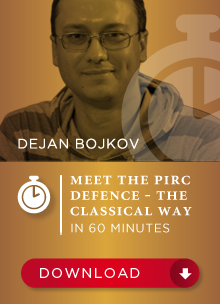 In the nineteen-twenties, hyper-modernism was making its appearance in the chess world. New openings were being tested, in which influence on the centre was being exerted from a distance. One such opening was the Pirc Defence. Chess was still very classical in nature, and when, at the New York tournament in 1924, Capablanca's opening choice as Black against Eduard Lasker was 1.e4 g6, this was called by the future world champion Alekhine: "a joke". However, chess proved to be richer than had been thought and the Pirc Defence established itself as an opening weapon for the creative player. The many attempts to refute the line with fast occupation of the centre and a direct assault (such as the Austrian Attack) prove that it is pretty much alive and still kicking. But why try to refute the Pirc, when one can get a small but stable advantage by simple development? In this 60 Minute course GM Dejan Bojkov of Bulgaria will unveil the secrets behind the Classical Line - 1.e4 d6 2.d4 Nf6 3.Nc3 g6 4.Nf3 Bg7 5.Be2 0-0 6.0-0. Following classical principles, White occupies the centre, finishes development and can look confidently to the future. All Black's main replies are covered in the videos - 6…c5, 6…c6, 6…Bg4, 6…Nb8-d7, as well as some rare options. Enjoy!

Meeting the Alekhine - The classical way
The Alekhine Defence belongs to those openings which face White with their very special challenges. GM Bojkov shows you new ideas in the variation with 4.Nf3, enabling you to systematically build up a good attacking position free of risk.
9,90 €

Attacking with the Pirc
No guts, no glory! With the Pirc Defence Black takes a bigger risk than usual, but in return may hope for higher dividends too. Let GM Bojkov show you how to optimize your chances.
27,90 €

The Elephant Gambit
Let Andrew Martin select a repertoire for you on this 60 mins, which, if used with discretion, will rack up the points.
9,90 €

The Fort Knox Variation in the French Defence
If you're one of those French Defence players who has been desperately searching for a reliable and easy-to-learn system against White's two main 3rd moves (3.Nd2 or 3.Nc3) then this is the 60 Minutes for you! The Fort Knox variation (3...dxe4 4.Nxe4 Bd7!
9,90 €
haut de page