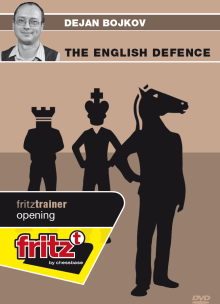 In the 1970s a group of strong English players (Miles, Speelman, Keene above all and later Short) developed a slightly unusual opening starting after the moves 1.d4 e6 2.c4 b6. Just like in the Grünfeld or the Alekhine Defences, Black concedes the centre. However, rather than provoking pawn advances by an early development of the knights, Black wants instead to develop his bishops (most frequently to the squares b7 and b4). This approach contradicts the orthodox rule of development (knights before bishops) but is not it better to get some pieces out instead of spending a lot of tempi with the knight in provocation?! The original character of the play as well as the good preparation by the aforementioned grandmasters led to the recognition of this setup as the English Defence. This opening, which is still very young and unexplored, has recently attracted some top players (Morozevich, Ponomariov, Mamedyarov) who have made good use of it in their games. In his latest DVD Dejan Bojkov of Bulgaria explores the line in detail and supplies you with all the information you require in order to be successful with the English Defence. Typical positional and tactical ideas are supported by plenty of theoretical information. Video running time: 5 hours 9 min.