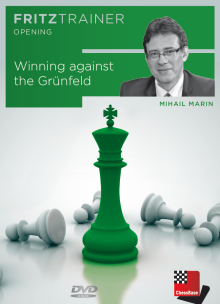 Beat the Queen's Indian: The modern Fianchetto Line
This DVD is packed full of new, exciting and novel ideas; based on a repertoire starting with the moves 1 d4 Nf6 2 c4 e6 3 Nf3 with g3! to follow.
29,90 €

The Sicilian Dragon Vol. 2: All Lines except 9.Bc4
The Dragon is one of Black’s most daring openings, leading to fascinating positions with opposite castling and strong mutual attacks. This DVD provides a complete and up to date repertoire to help Black to score with the Dragon.
29,90 €