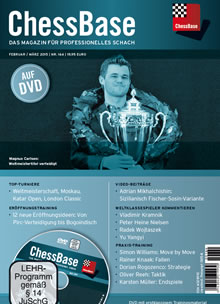 ChessBase Magazine 164 is made tastefully by GM Rainer Knaak and his team and the hard work put in by each and every contributor is quite apparent. The cost of the magazine is very reasonable which makes it a great “value for money” purchase. I would rather buy a ChessBase Magazine than any other opening DVD because with the CBM I get to train all the phases of the game. So let me take your leave as I have still a few tactical positions of Oliver Reeh left to solve!

ChessBase Magazine 162
Two historic tournaments in one issue! The Chess Olympiad in Tromsø ended with first Gold for China, and Caruana triumphed at the Sinquefield-Cup with 8,5 out of 10. Olympiad-special: Several hours of video analysis and interviews. 11 new opening articles
€19.95

ChessBase Magazine 165
Five top-class tournaments: Carlsen was among the starters twice (Wijk and Baden-Baden) and was victorious on both occasions. The same goes for Nakamura but in Gibraltar and in Zürich. The FIDE Grand Prix (Tiflis) saw an impressive victory by Tomashevsky.
€19.95

ChessBase Magazine 166
The high points of world class tournaments to marvel at and to enjoy: Gashimov Memorial Shamkir, Team World Championship and European Championship. Look forward to analyses by word class players, new trends in opening theory by Mihail Marin, and much more
€19.95