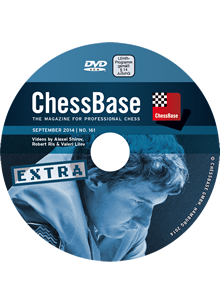 Alexei Shirov shows a game against Andrei Volokitin in the Kalashnikov variation of the Sicilian (1.e4 c5 2.Nf3 Nc6 3.d4 cxd4 4.Nxd4 e5). After a strategic beginning the game became very dynamic. According to Shirov the move 6.c4 in this line is often underestimated!

Valeri Lilov was very impressed by the game Jobava-Mamedyarov, Beijing 2012. The first moves – 1.b3 Nf6 2.Bb2 g6 3.Bxf6 exf6 – were unusual, and the further course of the game was unusual as well. Particularly noteworthy: the final attack on the king!

Robert Ris shows a classic: Chigorin-Zukertort, played in London 1883, a tournament, which Zukertort won with a great margin and ahead of Steinitz.

ChessBase Magazine Extra 165
Two sicilians (by Adrian Mikhalchishin and Valeri Lilov) as well as a wild game in the schmid benoni are the recent video subjects. Plus 18.983 recently played games.
€12.99