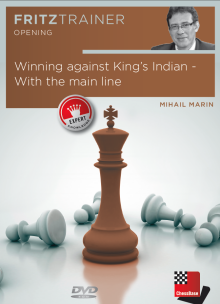 Solid and safe against the Indian openings: Play the Fianchetto
The King’s Indian and Grunfeld are notoriously tricky and theoretical openings. The Fianchetto variation avoids the main lines which Black players enjoy, and goes for a small but safe edge.
€29.90

Tactic Toolbox Benoni
On this DVD, Mihail Marin presents the major tactical themes and options available for both sides in the Benoni. Based on an interactive format the well-known theoretician and Grandmaster invites you to take part and challenge yourself.
€29.90

Play the Pirc like a Grandmaster Vol. 2: Attacking lines
The resulting positions are usually dynamic or double-edged and offer fairly balanced chances. The better tactician may win, but do not be disappointed if the game ends in a spectacular and logical draw!
€29.90

Tactic Toolbox Italian Game
This video course is intended as a tactical guide for Black, featuring themes such as the tactical abilities of the c5-bishop and the relatively restricted c6-knight, the kingside attack and the fight for the centre.
€29.90

The French Defence - Structures, Tactics and plans Vol.1 & 2 plus Powerbook/base
This video course is aimed as a tactical guide for Black, featuring the most typical combinations for the French structures.
€79.60 €67.90

The French Defence - Structures, Tactics and plans Vol.1 & 2
This video course is aimed as a tactical guide for Black, featuring the most typical combinations for the French structures.
€59.80 €54.90
top of page
Home page
New Products
Authors
Openings