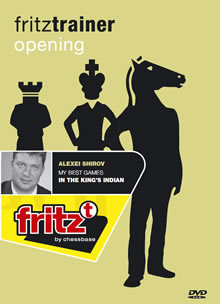 King's Indian: A modern approach
Bologan: "If you study this DVD carefully and solve the interactive exercises you will also enrich your chess vocabulary, your King’s Indian vocabulary, build up confidence in the King’s Indian and your chess and win more games."
29,90 €