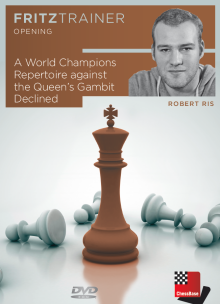 Mastering Pattern Recognition in the Opening
Pattern recognition is an important tool in modern chess, as it helps you to understand better the characteristics of a position. Particularly when you have been confronted with a surprise opening system played by your opponent, it helps when you can just
29,90 €

Strategy Training: How to Make a Plan
In every game of chess, there comes a moment when one is confronted with the question: what should I do now?
29,90 €

Calculation Training
This DVD emphasizes the importance of training your calculation skills. Dutch IM Robert Ris made a selection of training material which he uses in lessons with students ranging from 1400 to 2400.
29,90 €

The Chess Player's Mating Guide Vol.2 - Weakened kingside
The attention will be paid to the castled king and in particular on ways of exploiting the weakened kingside. Several well-known themes, pawnformations and other attacking weapons are covered in 8 chapters.
29,90 €

The Chess Player’s Mating Guide Vol. 1: The King in the Centre
A must-have for ambitious chess players who want to improve their own attacking skills.
29,90 €