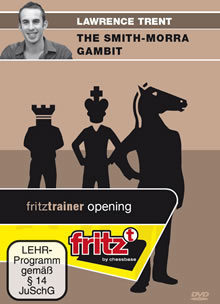 What do you do against the Sicilian Defence? Do you play a mainline, safe in the knowledge that despite being the most reliable way to gain an opening advantage, you could be condemned to spending years studying a huge body of opening theory, or do you choose an Anti-Sicilian, a way to sidestep the mainlines at the risk of allowing Black to have a sneaking chance to achieve equality? The Morra Gambit, characterised by the moves 1.e4 c5 2.d4 cxd4 3.c3 is one of the least played, yet according to IM Trent most underrated Anti-Sicilians that White has at his disposal. By sacrificing a pawn, White aims to rapidly develop his pieces with the objective of delivering a swift knockout blow to the unprepared Black camp. Objectively speaking, Trent emphasises, if Black knows his stuff he has various ways to achieve a perfectly reasonable position. The beauty of this opening, Trent explains, lies in its practical “over-theboard” potential. Black players will have trouble coping with unknown positions and being put on the back foot from the start. It should be of no surprise that around 50% of players with Black decide to decline the gambit, but even in this case Trent presents a host of tricky variations which allow White to play with venom and great attacking possibilities, not to mention a number of previously unseen theoretical novelties! Video runnig time: 5 h 25 min. 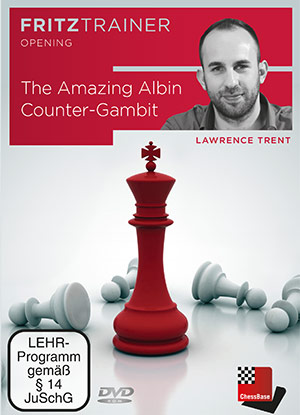 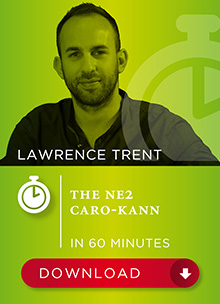 The Ne2 Caro-Kann
Caro-Kann players typically love their solid structures and modest setups, but with this bamboozling sideline they will be forced to enter unknown territory right from the off!
9,90 € 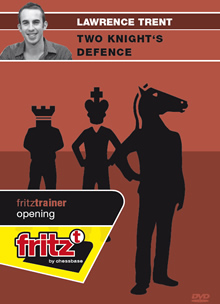 On this DVD, IM Lawrence Trent presents a comprehensive repertoire and thematic analysis of the most enterprising, yet well less documented move 1 e4 e5 2 Nf3 Nc6 3 Bc4 Nf6 4.Ng5 in the Two Knight’s Defence. Once labelled a “foolish” and “primative” lunge by the old masters, White ignores his development in order to immediately attack the Achilles Heel of Black’s position on f7. 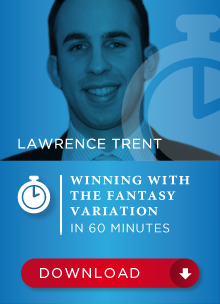 Winning with the fantasy variation

The Fantasy Variation (1.e4 c6 2.d4 d5 3.f3) is a tricky try by White to steer the game into muddy waters right from the off and take Black away from the solid positions he is accustomed to in the main line variations of the Caro-Kann. Traditionally the opening never gained too much credibility amongst top players, since White's attempt to preserve his pawn centre at the cost of weakening his kingside was hardly seen as a major threat to the super-reliable Caro. However, thanks to a wave of news ideas and innovations first introduced at the 2010 European Individual Championships and many more thereafter, the variation has made a major comeback and can now be found in the repertoires of some of the world's best. In this 60 minute video, IM Lawrence Trent will discuss the 5 main variations Black has at his disposal but how with each one White has a number of ways to keep the position full of play and dynamic possibilities, leading to games which loyal Caro players will have difficulty dealing with. 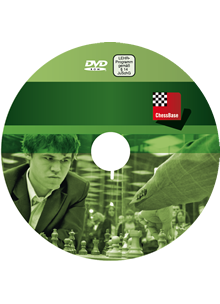 • 10.179 games, played between October and December 2012
• biggest tournament: London classic op, 804 games (1. Melkumyan and van Kampen)
• Rapd chess in Mexico with Magnus Carlsen
• Wch Seniors 22nd
• CBM Extra with videos in fritztrainer format:
• Adrian Mikhalchishin presents an idea in the English Opening
• Leonid Kritz analyses a classic, this time it's a Slav game Euwe-Alekhine from the revanche match in 1937
• Lawrence Trent has the Trompowsky Attack in his repertoire - like many other English players. He presents another Tromp game form his own practice. 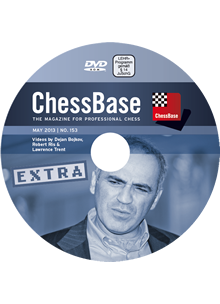 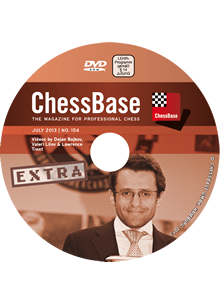 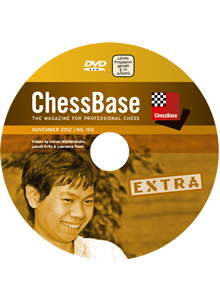 • 37.120 games, played between August and October 2012
• biggest tournament: Istanbul ol (Women), 2706 games (1. Russland vor China)
• St Petersburg Rapid (1. Dominguez, 2. Svidler)
• EU-ch U08 bis U18
• CBM Extra with videos in fritztrainer format:
• Adrian Mikhalchishin reminds of another big player from the Soviet chess school - Efim Geller
• Leonid Kritz analyses a classic, this time it's again a game Euwe-Alekhine from the revanche match in 1937
• Lawrence Trent has the Trompowsky Attack in his repertoire - like many other English players. He presents a Tromp game form his own practice. 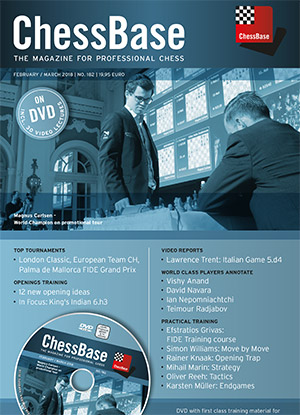 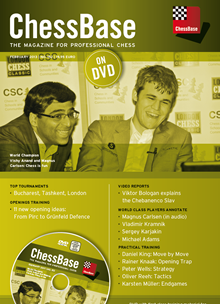 ChessBase Magazine 152
ChessBase Magazine is the prime source of information for anyone wanting to start their tournament in pole position. Highlights from the January edition include game analysis by Super-GMs such as Kramnik, Adams and Karjakin and much more.
19,95 €