If as White you absolutely want to have the French pawn chain on the board, then you will choose the Advance Variation and right on move three put your e-pawn on e5. This is because 3.Nc3 and 3.Nd2 both allow 3...dxe4, which White does not have to fear but which leads to a totally different type of position. The early advance 3.e5 does do without the gain of tempo against a Nf6, but in return the pawn prevents the development of the knight to f6. And, as in the Tarrasch Variation, White now plans to support his pawn chain with c3 after ...c5. The early development of this system was undertaken by Louis Paulsen (1833–1891) and Aaron Nimzowitsch. In the late 20th century Evgeny Sveshnikov took up their ideas and became one of the pioneers of this opening. The fixing of the central structure on move three imposes a clear pattern on the game. In the duel of the pawn chains, the main agenda will concern plans and manoeuvres. 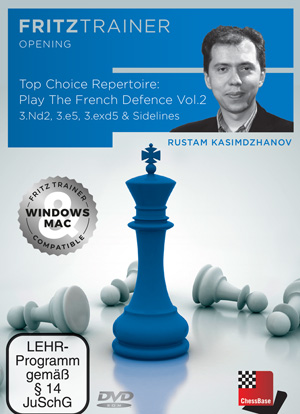 Top Choice Repertoire: Play the French Defence Vol.2
In this two-volume video course former world-champion and startrainer Rustam Kasimdzhanov shows you the ins and outs of this hugely complex opening.
by Rustam Kasimdzhanov
€29.90 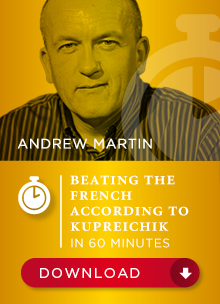 Beating the French according to Kupreichik
1.e4 e6 2.d4 d5 3.e5 c5 4.c3 Nc6 5.Be3!?. Andrew Martin uses the games of Kupreichik to show why this line could catch many French aficionados unprepared and is very dangerous for Black.
by IM Andrew Martin
€9.90 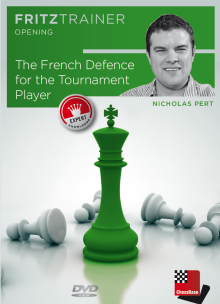 The French Defence for the Tournament Player
This French Defence DVD is a complete attacking opening repertoire for black after 1.e4 e6. GM Nick Pert has played the French defence his whole life and provides all his la test and most up to date analysis crammed into 1 DVD.
by Nicholas Pert
€29.90
top of page
Home page
New Products
Authors
Openings