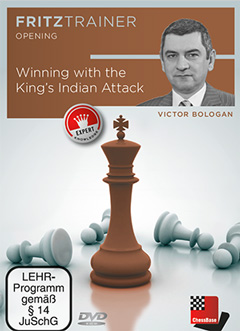 Winning with the King's Indian Attack

The Aggressive Classical Dutch for Black
The Dutch (1.d4 f5) is known as a very aggressive and unbalanced opening. After watching this DVD players should feel confident to play the exciting, attacking Classical Dutch against 1.d4, 1.c4 and 1. Nf3.
29,90 €

A Classical Guide to the French Defence
This DVD gives you the key to start out with the French Defence. GM Yannick Pelletier is a specialist of this opening, and believes that the most efficient way to understand its ideas, plans, and typical structures is to study classical lines.
29,90 €

The Reliable Petroff
The Petroff (or Russian) Defence which is characterised by the moves 1.e4 e5 2.Nf3 Nf6 has been popular at the highest levels for many years and enjoys the reputation of being an extremely solid defence.
29,90 €

Winning with the King's Indian Attack
The King’s Indian Attack is full of positional and tactical ideas and often an unpleasant surprise for the opponent.
29,90 €

The Popular Italian
In the actual DVD Bologan covered all answers by Black against 3.Bc4, especially 3...Bc5, presenting all relevant possibilities for White.
29,90 €

Reti - A Repertoire for White
Starting with 1.Nf3 the Reti is designed for those players who like strategy, manoeuvres and plans. Bologan presents a repertoire based on 1.Nf3 giving you options for all major replies.
29,90 €

The Modern Pirc
The Modern Pirc is actually a mixture of the Caro-Kann and the Pirc. In many lines Black combines the ideas of the classical Pirc in which the fianchettoed bishop is important with the Caro-Kann idea to fight for the center with c6-d5.
29,90 €

The complex Najdorf
Strategy, combinations, attack and defence, sacrifices and marvellous manoeuvres – exciting chess is all about the Najdorf!
29,90 €

King's Indian: A modern approach
Bologan: "If you study this DVD carefully and solve the interactive exercises you will also enrich your chess vocabulary, your King’s Indian vocabulary, build up confidence in the King’s Indian and your chess and win more games."
29,90 €
top of page