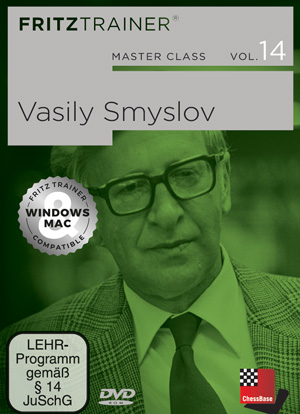 Master Class Vol.15 - Viktor Korchnoi
In this video course, experts (Pelletier, Marin, Müller and Reeh) examine the games of Viktor Korchnoi. Let them show you which openings Korchnoi chose to play, where his strength in middlegames were, or how he outplayed his opponents in the endgame.
29,90 €

Master Class Vol.11: Vladimir Kramnik
This DVD allows you to learn from the example of one of the best players in the history of chess and from the explanations of the authors (Pelletier, Marin, Müller and Reeh) how to successfully organise your games strategically, consequently how to keep y
29,90 €

Master Class Vol.13 - Tigran Petrosian
Considered a master of prophylaxis, Petrosian sensed dangers long before they actually became acute on the board. In his prime, Petrosian was almost invincible. Let our authors introduce you into the world of Tigran Petrosian.
29,90 €

Master Class Vol. 12: Viswanathan Anand
This DVD allows you to learn from the example of one of the best players in the history of chess and from the explanations of the authors how to successfully organise your games strategically, consequently how to keep your opponent permanently under press
29,90 €

How to study the classics
On this DVD Adrian Mikhalchishin discusses "How to study the Classics". Every chess player should have studied games of the past in order learn basics of strategy. This DVD is a good start!
29,90 €