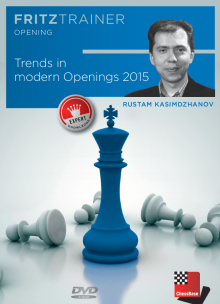 Modern tournament practice has virtually surpassed the so-called „opening theory“. Thanks to a wealth of tournament games some openings and lines develop so rapidly that even the ambitious amateur has difficulties to keep his own repertoire updated. But experts help. Ex- FIDE World Champion Rustam Kasimzhanov is considered to be one of the leading experts in the field of opening preparation. In three World Championship matches he was second of Viswanathan Anand and helped him to successfully defend the title. And with Kasimdzhanov’s help and excellent opening preparation the German team surprisingly became European Team Champion 2011. On this DVD Kasimdzhanov presents highly topical openings and shows their current state of „theory“. From the perspective of a top player he explains why certain openings are played while others more or less vanished from tournament practice. This DVD helps you to remain up-to-date in a number of important and popular openings and provides you with many ideas for your own repertoire. With tips and analyses for the Tajmanov Sicilian 7.Qf3 Ne5 8.Qg3 („Giri’s Variation“), the Russian Variation in the Grünfeld („Anand’s Db3“), Najdorf with 6.h3 („Caruana’s h3-Najdorf“), the Leningrad Dutch (7…Qe8) , the Modern Bogo-Indian (3…Bb4 4.Nbd2), the Classical King’s Indian with 6.h3. 18 videos and ten interactive video-tests. Plus database with analyses about the systems presented.