This German grandmaster was born in 1948. The son of a classical philologist, Hübner grew up in Cologne and did his PhD in classical philology (1973). Even when Hübner had made his international breakthrough, he (at first) remained a semi-professional and in addition to chess he continued to devote himself to his academic work on the deciphering of ancient papyri. Hübner, who is reputed for having mastered more than a dozen languages, was for more than two decades, from 1970 into the 1990s, the strongest grandmaster in the Federal Republic of Germany. During this period Hübner always remained one of the group of the world's top players, and in many years he figured in the top ten.
After early successes at national level (individual German Champion 1967, victor in Büsum 1968) Hübner came in joint second with Hort in the Athens zonal tournament of 1969. And then came his sensational shared second place (behind Bobby Fischer) with Efim Geller and Bent Larsen in the interzonal tournament in Palma de Mallorca 1970. This success not only placed Hübner amongst the world elite and gained him the title of grandmaster, but it also brought with it his first qualification for the candidates matches. However, things did not go so well in his duel against former world champion Petrosian (1971 in Seville): after the first six games had been drawn, Hübner lost the seventh as the result of a blunder. Whereas the playing conditions did not appear to disturb the Petrosian who was hard of hearing, Hübner asked the organisers to provide a quieter playing room. But because they did not meet his wishes, Hübner resigned the match, a decision which gave rise to much discussion in the public arena and amongst his grandmaster colleagues.
At the turn of the year 1980/81 Hübner got even closer to a match for the WCh. In the candidates final he was pitted against Korchnoi in the struggle for the right to challenge World Champion Karpov. Hübner was in the lead with 3.5:2.5 when in the seventh game he blundered away a rook. This disaster apparently considerably disturbed Hübner's equilibrium and he resigned the match on the score of 3.5:4.5 (the adjourned games nine and ten were never completed). Hübner qualified yet again for the candidates cycle in 1990, but was eliminated by Jan Timman. In 1992 in Dortmund Hübner won a much praised game against World Champion Garry Kasparov. Hübner took part in a total of 11 chess Olympiads with great success, especially in Skopje 1972 (15 points from 18 games) and Novi Sad 1990 (7 out of 10), but his first team medal did not come until his last Olympiad in Istanbul in 2000 (2nd place).
In the Bundesliga Hübner has played for various teams (SG Solingen, SG Köln Porz, Hamburger SK, Bayern München). In addition, Hübner was also active as a chess author, and above all his scientifically rigorous game analyses are reckoned to be absolutely distinctive. Other tournament successes: victor in Houston 1974, Oslo 1974, Chicago 1982, Biel 1984, German champion 1999 etc. 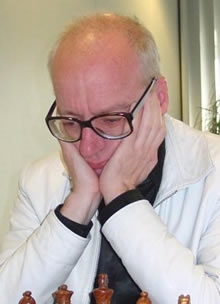