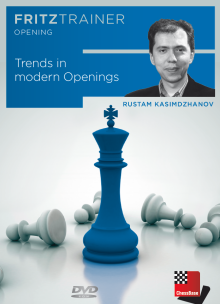 Modern tournament practice has virtually surpassed the so-called „opening theory“. Thanks to a wealth of tournament games some openings and lines develop so rapidly that even the ambitious amateur has difficulties to keep his own repertoire updated. But experts help. Ex-FIDE World Champion Rustam Kasimzhanov is considered to be one of the leading experts in the field of opening preparation. In three World Championship matches he was second of Viswanathan Anand and helped him to successfully defend the title. And with Kasimdzhanov’s help and excellent opening preparation the German team surprisingly became European Team Champion 2011. On this DVD Kasimdzhanov presents highly topical openings and shows their current state of „theory“. From the perspective of a top player he explains why certain openings are played while others more or less vanished from tournament practice. This DVD helps you to remain up-to-date in a number of important and popular openings and provides you with many ideas for your own repertoire. With tips for the Najdorf Variation, Caro-Kann, the Berlin Defense, Ruy Lopez Main Line with 6.d3, Ruy Lopez with 3…g6, Scotch Opening, Petroff, Queen’s Gambit Declined with 4…Nbd7, Main Line Slav, Ragosin Variation and Black Double Fianchetto against 1.d4. More than 20 videos with about four hours running time and interactive test at the end.

Trends in modern openings 2015
This DVD helps you to remain up-to-date in a number of important and popular openings and provides you with many ideas for your own repertoire.
29,90 €

The Sicilian Dragon Vol. 1: Main Line with 9.Bc4
Volume one of the DVD deals with 9 Bc4, White’s sharpest option, and shows how Black can counter this ambitious try by White with the main lines of the Soltis variation (12…h5), which was played by Magnus Carlsen regularly as well.
29,90 €

The Ruy Lopez Breyer Variation
Pavel Eljanov explains in depth what Gyula Breyer already saw in 1911 and what became an opening choice of the likes of Kasparov, Kramnik, Anand or Carlsen. The Breyer Variation, which is characterised by the knight retreat to b8.
29,90 €

The new McCutcheon
Opening expert and former World Champion Rustam Kasimdzhanov shows you the secrets in the McCutcheon (3.Nc3 Nf6 4.Bg5 Bb4). He shows why Bd2 is no longer the main line and which continuation will be the theory of tomorrow.
29,90 €

The Modern Pirc
The Modern Pirc is actually a mixture of the Caro-Kann and the Pirc. In many lines Black combines the ideas of the classical Pirc in which the fianchettoed bishop is important with the Caro-Kann idea to fight for the center with c6-d5.
29,90 €

Winning against the Classical Slav
The videos on this DVD give White a repertoire with concrete variations against all main lines Black can play and also show the typical strategic and tactical ideas of the Slav and the hidden subtleties of the position.
29,90 €
haut de page