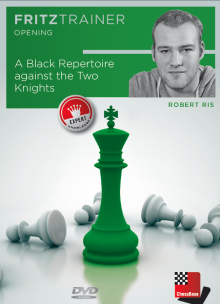 A Black Repertoire against the Two Knights

With the Traxler Variation (4.Ng5 Bc5!?) spearheading their repertoire, any player should look forward to fighting for the initiative against the Two Knights with Black. Its slightly dubious reputation shouldn’t put you off from buying this DVD - as the author clearly demonstrates - a great deal of spectacular resources for Black are on show, supported by original analysis. Exponents of the Traxler variation in tournament practice include Shirov and Beliavsky, with the latter having used it to defeat Anand (!) at Linares 1991. White can hope for an advantage in but a small number of lines, and e ven then there is still enough counterplay for Black to give his opponent a hard time. What is more, the DVD includes a host of ideas for actively meeting 4.d3 and 4.d4 as well, so that after studying the material you basically have a complete repertoire against the Italian Game. An unprepared opponent could easily fall victim to Black’s wealth of tactical possibilities, potentially making this repertoire an ideal weapon for playing for a win with Black!

The Bishop's Opening and The Italian Game
Studying the content of this DVD and adding these openings to your repertoire will provide players with a very strong tool to fight 1...e5 - as the practice of the author clearly demonstrates.
29,90 €

The modern Grand Prix Attack
This DVD will provide you with a comprehensive repertoire that explores all of Black’s ideas against the Grand Prix set up. My recommendations include a number of lines which are relatively unexplored by theory, and I have analysed them extensively.
27,90 €

Move by move - (how to) get into a master's mind!
The best way to improve at chess is to carefully study master games, stop at certain positions and think about candidate moves. Doing this on your own can be difficult and tiresome, but on this viddeo course, you will be guided by worldrenowned trainers!
29,90 €

A Complete Black Repertoire against 1.Nf3 & 1.c4
This video course offers you a complete, clear repertoire for Black against the moves 1.Nf3 and 1.c4. The recommended variations are easy to learn and not difficult to remember, but also pose White serious challenges.
29,90 €

A Complete Black Repertoire against 1.d4
Besides covering all the critical lines after 1.d4 & 2.c4, popular systems such as the Trompovsky, London/Jobava System, Torre Attack, Colle System and Veresov are dealt with as well.
29,90 €

An Attacking Concept in the Giuoco Piano
In the Italian Opening with 4.c3 Nf6 5.d4 exd4 6.cxd4 Bb4 the move 7.Nbd2 has replaced the alternatives 7.Nc3 and 7.Bd2 as the new main line. A new idea was recently introduced by Mamedyarov and successfully employed by Jorden van Foreest.
9,90 €

Calculation Training Booster
In this video course, twenty-nine examples with multiple questions are presented in the interactive format, which is ideal for a range of playing strengths. Step by step you will be taken through the complex positions.
29,90 €
haut de page
Page d'accueil
Nouveautés
Auteurs
Ouvertures