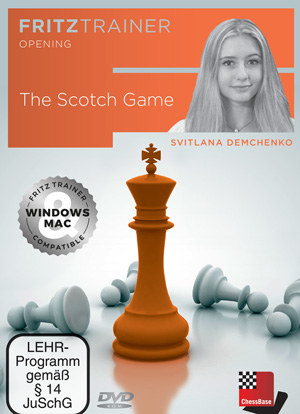 The Sizzling Scotch Gambit
The Scotch Gambit is a brazen yet utterly sound system for White who immediately opens up the position, by sacrificing a central pawn, in an attempt to assassinate the enemy king as quickly as possible.
€9.90

The Modern Scotch Opening
In this DVD, Parimarjan Negi looks at the latest revolution in Scotch theory that has completely changed white’s plans, and once again brought back the interest of the world’s elite.
€29.90

Understanding Material Imbalances
This video-course focuses on several types of material imbalances, such as Rook vs 2 Minor Pieces, Queen vs 2 Rooks, and Queen vs Pieces.
€29.90

Surprising Your Opponents with the Lazy Sicilian
In just 60 minutes, you will be well-equipped with a surprise weapon, which will take most of your opponents out of book right from the start.
€9.90
top of page
Home page
New Products
Authors
Openings